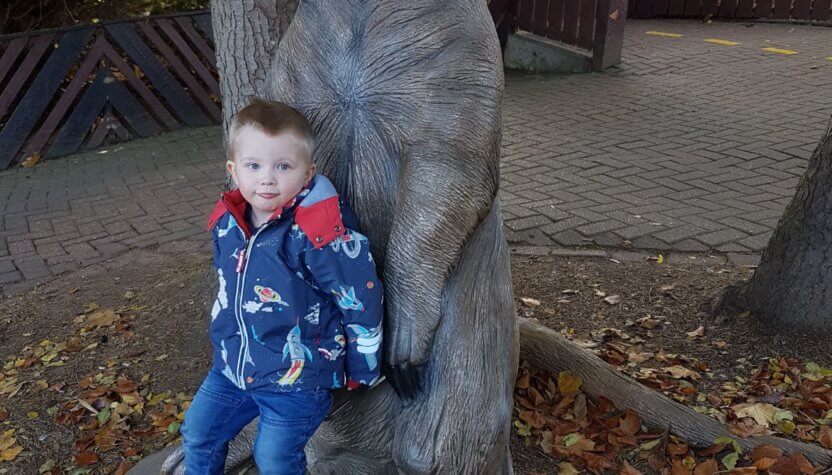 “Henry is three years old and has the rare genetic disorder Diamond Blackfan Anaemia.  This means that his bone marrow does not function correctly leaving him reliant on blood transfusions every 3-4 weeks to stay alive. 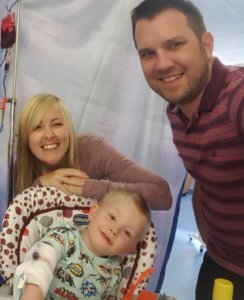 We found out that Henry was poorly at our 12-week pregnancy scan, he had an increased nuchal measurement at the back of his neck and a lot of excess fluid surrounding his body. At that point, we had the option of having genetic testing or a termination and we were told that there was an 80% chance Henry would not survive. We opted for an amniocentesis, which revealed he had none of the more common genetic disorders and doctors could not give us a diagnosis, so we continued with the pregnancy.

Much to everyone’s surprise, Henry made it to 36 weeks before doctors noticed he was really struggling, so he was born via emergency c-section four weeks early.  He was extremely poorly when he was born; he had to have two immediate blood transfusions, was placed in an induced coma and ventilated.  He spent three weeks in the NICU and has been blood transfusion dependent ever since birth.  We finally got a diagnosis of DBA when he was three months old following a bone marrow biopsy, which was confirmed by genetic testing a few months later. 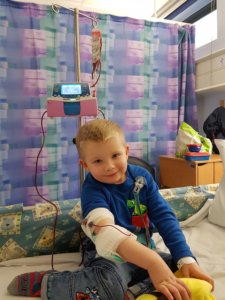 Henry has had almost fifty blood transfusions in his life. Each blood transfusion he has deposits iron into his body which is fatal if left untreated, so we have to insert a needle in his leg or tummy every night and connect him up to a medication pump for twelve hours overnight to strip the excess iron from his body. He’s very resilient but he really dislikes having to be hooked up to the pump! Before a blood transfusion he gets very tired, pale and emotional, he is usually very even-tempered but the smallest thing will make him cry when he’s running low on blood. The transformation after a transfusion is like night and day, he is full of energy and Henry is old enough now to tell us that it makes him feel so much better. Because Henry is towards the severe end of the spectrum for the disorder, he is due to have a bone marrow transplant this year.  He will have a week of chemotherapy to knock out his faulty bone marrow prior to the transplant and will then have three months in isolation in hospital followed by up to a year’s isolation at home while his immune system recovers.

We know that this will be a difficult time for us as a family but if it works, it will mean Henry will be able to produce his own blood so will no longer need blood transfusions or the nightly pump! 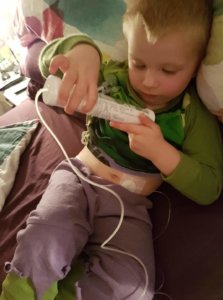 Henry’s illness has put a lot of strain on us as a family. I had to quit my job to care for him so we were immediately down to one income and there’s no real way of describing the emotional impact of a diagnosis of a chronic, life-threatening illness for your child. The Sandcastle Trust stepped in and supported us in the best way possible, by giving us the opportunity to have quality time together as a family.  We were gifted annual zoo passes for our local zoo, not just for us, but for Henry’s Grandparents too as they are such a fundamental part of our family and support us with Henry a lot. I have some health issues myself and knowing that when I’m not feeling up to it, Henry’s grandparents can pop over and take him to the zoo and have a fantastic time while I can focus on myself is priceless. We’ve been to the zoo at least every two weeks since we were gifted the passes, Henry had never been to the zoo before as it would have cost us £80 just for one visit and we simply couldn’t afford it. For him to have been able to go whenever he wants over the last few months and for us to be able to spend care-free time as a family and do some ‘normal’ activities is worth it’s weight in gold to us. Henry goes through so much day to day and the isolation following his impending bone marrow transplant will be incredibly challenging, to have lots of happy family time together now is a brilliant gift. We simply would not have been able to do this without the Sandcastle Trust and are forever grateful for them for their help and support.”