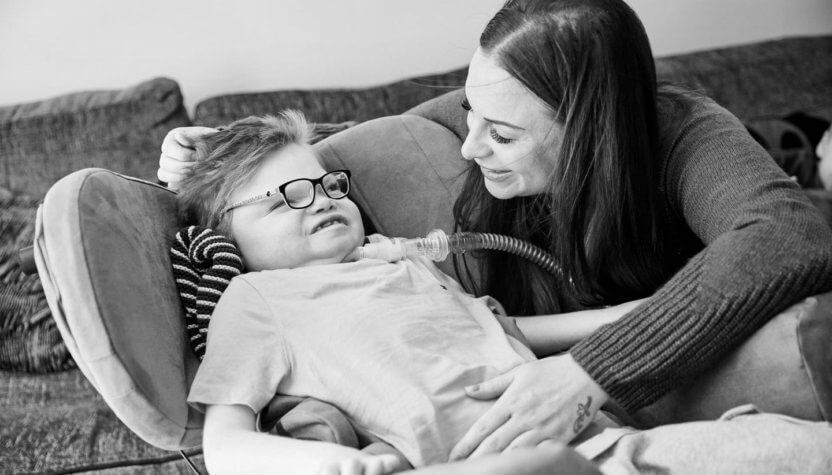 It was at five-months-old that Mum Natalie McDougall started to worry about her first-born son Louie.

“He was born very small, just 4lb 11oz, but at five-months-old his foot had dropped into a pointed position,” Natalie, recalls. “He wasn’t meeting milestones, wasn’t sitting up or bearing any weight on his legs.”

Louie was referred to a paediatrician and diagnosed with hypotonia, which is low muscle tone. He had a cast fitted to correct the foot drop and started further tests to determine what could be causing it.

Natalie, from Mitcham, Surrey, says: “We were out shopping when Louie collapsed and stopped breathing. He was rushed to hospital where doctors told us he had respiratory bronchiolitis and his diaphragm had become paralysed. It was the last time he was able to breathe for himself and he was ventilated in hospital for the next seven months.”

Louie was transferred to the Evelina London Children’s Hospital and tested for the rare genetic disorder SMARD (spinal muscular atrophy with respiratory distress). The test came back positive in January 2013. SMARD is an inherited neuromuscular degenerative disease that causes infants to lose voluntary muscular functions, such as breathing and swallowing.

One in 50,000 people carry mutations in the IGHMBP2 gene that is linked to SMARD. Natalie and Louie’s father, Reece were both found to be carriers of the faulty gene.

In SMARD, the link between the brain, the spinal cord and muscles is impaired. Muscles can no longer be stimulated, which causes them to waste and it affects every single muscle in the body. SMARD is a life-limiting condition and there is no treatment available.

Natalie explains: “We were devastated. The doctors told us we needed to let Louie go naturally and there was no hope. I didn’t know 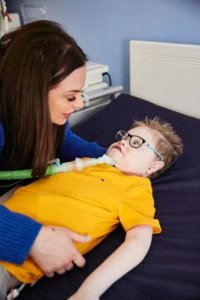 anything about genes or SMARD, but I researched it and pushed for a tracheostomy to be fitted which would enable my baby to come home. In March 2013 Louie had the tracheostomy fitted and was home four months later with a ventilator, which is the size of a lunchbox.”

At first Louie could still move his limbs, but the condition progressed quickly and he became fully paralysed from the neck down, unable to walk, sit up, lift his head and or speak.

With such complex needs, Louie needed round the clock medical care – which Natalie and Reece were trained to do with some help from night-time nurses.

“We ran our home like an Intensive Care Unit. It was hard work, particularly since we had other children,” Natalie explains. “We both had to give up our jobs to care for Louie. We didn’t want to leave Louie in a hospice.”

Natalie adds: “Despite being under the care of the palliative care doctors Louie was a happy and smiley boy.  He loved to be cuddled by his brothers and watch Disney films. He was home schooled by a tutor for one hour a day and used an eye-gaze for simple words.” 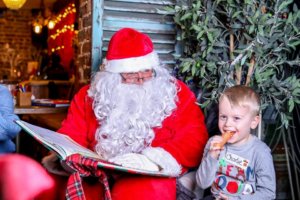 Natalie says: “I was really worried about having other children. We saw a geneticist and whilst the love you have is the same for each child, we decided we wouldn’t continue with a pregnancy if we had another baby with SMARD. I had a CVS diagnostic test with all three pregnancies.

“We attended The Sandcastle Trust Christmas party in 2018,” Natalie explains. “Unfortunately, Louie wasn’t well enough to go, but his younger brothers had a lovely time and it was really helpful to meet other families with rare genetic disorders, share experiences and have support from the charity.”

Then, tragically, on 10 May 2019, aged 7, Louie passed away leaving his family completely devastated.

“Although Louie had a life limiting condition you can never really be prepared to lose a child.” Natalie explains: “When Louie was with us, life was a lot more restricted and our lives revolved around him.  Losing him was completely life changing and our whole family found it hard to adjust to our ‘new’ life.”

Louie’s three younger brothers struggled to understand his loss, particularly Charlie.  Natalie explains: “Charlie finds Louie dying hard to talk about and will often burst into tears or just say he doesn’t want to talk about it.”

The family was supported by The Sandcastle Trust after Louie’s death.  Natalie says: “The Sandcastle Trust arranged for us to have a short break at Butlins.  It allowed us a chance to remember Louie and relax whilst creating some fun, happy family memories for Charlie, George and Arthur.  Charlie said it was “the best holiday ever!”

Natalie adds: “Louie taught me so much during his life and how to truly love and care for someone. I will miss him every day for the rest of my life.”